The word stoma comes from Greek to mean “an opening”. There are many types which are formed for a variety of reasons, but here we will focus on diversions of the urinary or gastrointestinal tract to the abdominal wall. These can be temporary or permanent and their purpose is predominantly the diversion of waste products.

Beware though that a stoma bag may not be a true stoma, but instead could be collecting drain output, a fistula or serous discharge from an open wound. 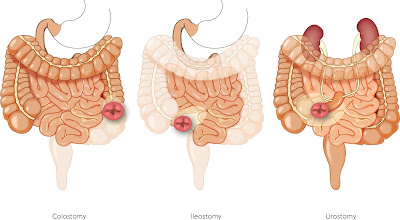 Colostomy
It can be formed from any part of the colon, but typically the descending colon is most commonly used. Thus, colostomies frequently lie on the left side of the abdomen. As the stoma occurs towards the end of the bowel, the stool should appear normal. As the waste produced isn’t irritating to the skin, the stoma can be flush to the skin.

Ileostomy
This is a stoma created from the small intestine (ileum). An indication could be to de-function the large bowel (not allowing content to pass through) to allow it to heal following resection or to relieve inflammation secondary to inflammatory bowel disease. It is also a choice in patients who undergo complex rectal surgery for diversion of waste products. End or loop ileostomies exist (similar to above).

The content is more liquid and can irritate the skin and hence ileostomies are spouted. Many ileostomies are on the right side of the abdomen, but not all. The spout is usually the most helpful feature to differentiate the two stomas.

Urostomy
This allows the patient to pass urine when it is otherwise not possible to pass urine via the bladder e.g. following a cystectomy for malignancy. Ileal conduits are the most common, but they can be differentiated from GI stomas due their size and as they are flush to the skin.

Feeding tubes
Formation of a tract to the stomach (gastrostomy) or the small bowel (jejunostomy) for feeding patients who have swallowing difficulties secondary to obstruction or stroke or patients undergoing radiotherapy.

Examination of a stoma
Inspect 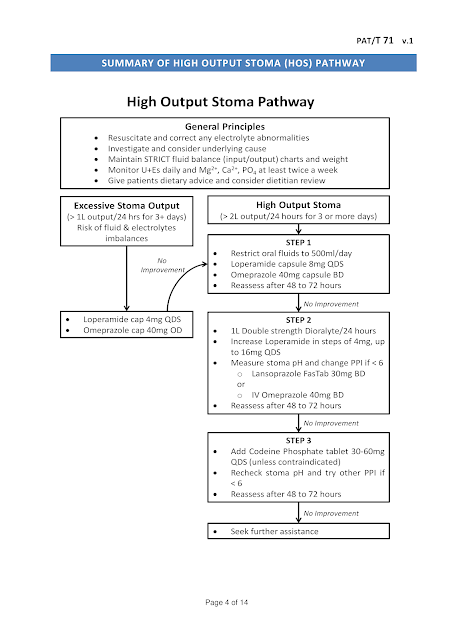 Basic stoma care
Having a stoma is a big change for patients, thus ensure you support them in coming to terms with it & empower them to look after their stoma. The stoma nurses are outstanding as they will discuss the situation with patients pre-operatively, helping them mentally prepare & educating them on lifestyle changes, what products to use & often give them a supply of things to try.

A dietician & stoma nurse may also advise a reduction in fibre intake for a few months to reduce the risk of complications. In particular, they may advise avoiding foods with husks (e.g. sweetcorn) or tough stems (e.g. broccoli, celery) to avoid bezoar obstruction.