In this article, we’ll cover the treatments used in Diabetes Mellitus. We’ll look at key things you need to know about each therapy, when you might start it & common adverse effects. This article isn’t comprehensive or a guideline – you should still look up information & a guideline before starting any treatment. 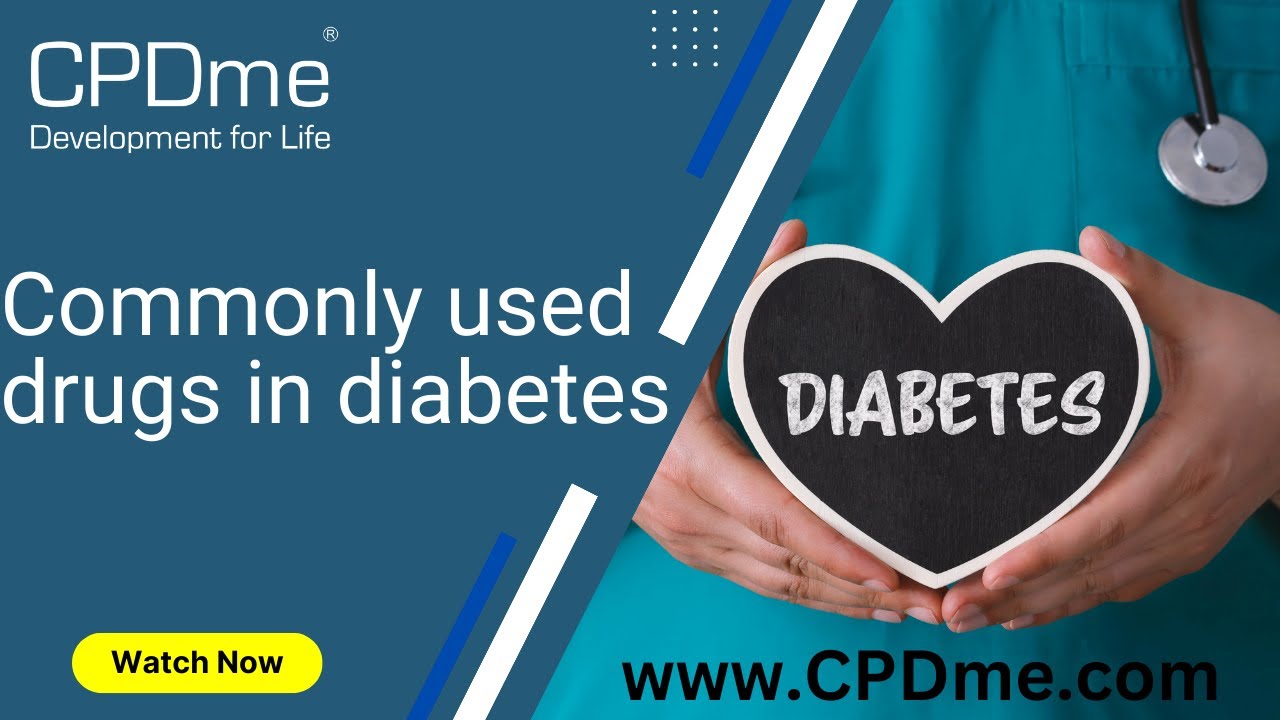 Type 1 Diabetes (or those with pancreatic diabetes) are usually treated with insulin alone. In contrast, with Type 2 Diabetes there is a range of drugs to choose from. You need to balance the benefits and risks of the drug, aiming to adequately control blood sugars (CBGs) whilst avoiding weight gain. There are many drugs that will control the blood sugars (CBGs) resulting in an excellent reduction in microvascular complications (neuropathy, retinopathy, nephropathy), but many of the older drugs actually increased macrovascular risks (ischaemic heart disease, peripheral arterial disease & cerebrovascular disease) & resulted in weight gain. IHD & Strokes are the biggest killers in T2DM – that’s why any new diabetes medications are now required to show benefits in these outcomes too.

If a patient presents with features of Type 1 Diabetes such as weight loss or ketosis, which suggest insulin deficiency, we will often start these patients on insulin whilst awaiting confirmatory tests of their type of diabetes. This is safer as otherwise, the patient may develop life-threatening DKA. If T2DM is confirmed or suspected, these patients are then started on oral agents as per the algorithm below & the insulin is carefully weaned.

How to choose which treatment to use in T2DM?

We regularly diagnose new diabetes in hospital as every patient who is admitted with have their glucose checked at least once. Our goal in hospital is to not achieve perfect control, but reduce their CBGs to a safe range of around 8-15 mmol/L. This safe range reduces the risk of DKA/dehydration/impairment of the immune system without risking life-threatening hypoglycaemia in hospital or on discharge. We know that when patients are discharged their activity levels may increase and the food they eat will change, hence once discharged the patient may suddenly be at higher risk of hypoglycaemia. If the patient is only on drugs that would not be expected to cause hypoglycaemia (e.g. metformin, “-gliptins”), we may aim for lower targets closer to the ideal range. Upon discharge, the patient can monitor their CBGs and receive follow up via their GP.

Unfortunately, the NICE guidelines are out of date, but the American Diabetes Association has published a great algorithm:

Metformin should always be your first-line drug unless contraindications of severe renal/liver impairment. It is typically used after a 6-8 week trial of lifestyle changes aiming for weight loss, if the HbA1c remains above 53 mmol/mol. These days it is commonly used from the moment of diagnosis due to excellent prognostic benefits & low cost.

If there is a contraindication, you can call the diabetes team for support who will choose between sulphonylureas, DPP-4 inhibitors or insulin.

If the HbA1c remains above 53 mmol/mol despite metformin or first-treatment, a second-line agent may be considered. In hospital, decisions regarding this are typically guided by the Endocrine or Diabetes team. Broadly, these are some of the considerations we have:

*Do note that GLP-1 analogues are typically used as a third agent although as they are becoming cheaper & have excellent positive macrovascular outcomes they are being introduced earlier for those who are overweight/have metabolic syndrome.

If the HbA1c still remains high, we will aim to commence a third non-Insulin agent. This will follow the same principles as above, but note that GLP-1 analogues & DPP-4 inhibitors are not given together as they have the same underlying mechanism so have no additive effect.

After this (or if no other agents are suitable), if the HbA1c remains above 58 mmol/mol, we will typically start insulin which is discussed in more detail below.

What are the medications available, their risks & how do I start them?

This drug works by reducing the release of glucose & improving sensitivity to insulin. It therefore should not cause hypoglycaemia. They are the first-line therapy in T2DM:

Typically it is commenced after a 6-8 week trial if the HbA1c remains above 53 mmol/mol but increasingly it is started at the time of diagnosis due to excellent improvement in macrovascular complications (heart attacks, stroke).

Warn patients that they may get gastrointestinal side effects, but these will settle if they persist. Patients are started on 500 mg once or twice a day and increased each week by another 500 mg until they reach 1 g twice daily. This stops them from completely abandoning Metformin due to GI side effects, especially when it is the drug with the best evidence base of positive incomes. Modified-release preparations are more expensive but available for those that still continue to have GI side effects.

A patient should ALWAYS be on metformin unless there is a good reason for them not to be on it due to the excellent benefits & low cost. If you see that a Type 2 diabetic patient isn’t on metformin, always ask why not?

Occasionally, we’ll use metformin in Type 1 Diabetics who are starting to develop insulin resistance as evidenced by weight gain & increasing requirements for insulin beyond 1-1.5 units per kg.

This drug works by making your pancreas release insulin (regardless of the blood sugar). As it causes the release of insulin, it usually causes weight gain & can cause significant hypoglycaemia.

It was frequently used as a second-line therapy because it is cost-effective & has a significant evidence-base supporting its use. These days, the alternative drugs have much better macrovascular outcomes so we’re using sulphonylureas less & less.

Gliclazide is the most commonly used drug in this class as older sulphonylureas increased macrovascular complications. It is typically used in patients who are lean. In patients who are overweight or have established cardiovascular/cerebrovascular or renal disease – you should strongly consider alternative agents.

If the HbA1c remains above 53 mmol/mol, depending on when the patient is hyperglycaemic 40 mg once or twice daily of Gliclazide will be started and titrated based on response. For example, if the patient’s morning/fasting CBG was elevated above the target, we would add in or increase the dose with dinner. For gliclazide, the dose can go up to 160 mg twice daily.

Be particularly careful when using sulphonylureas in:

Sick day rules: Sulphonylureas should be held if the patient is not eating & drinking

These work by stopping the breakdown of GLP-1. They are less potent than GLP-1 analogues causing increased insulin secretion with meals but typically not weight loss. They should not be used alongside GLP-1 analogues as they have no additive benefit. They are useful in the elderly and in obese patients.

Commonly used agents include linagliptin, sitagliptin & alogliptin. Of these, linagliptin can be used without dose adjustment in even severe renal failure.

Sick day rules: Usually can be continued without concern

The class includes canagliflozin, dapagliflozin & empagliflozin. These work by blocking glucose reabsorption in the kidneys, therefore, causing a loss of glucose & fluid. They are not expected to cause hypoglycaemia. They can be used on their own or in conjunction with other therapies.

Sick day rules: These drugs should be stopped if a patient is unwell due to the risk of severe dehydration & hypotension

This is typically started as a third-line therapy that works by promoting insulin secretion with meals & increasing satiety thereby reducing caloric intake & weight. As it increases insulin secretion associated with meals, it is not expected to cause hypoglycaemia. The aim is to achieve a reduction of HbA1c of 11 mmol/mol and/or 3% weight loss within 6 months.

As it has such favourable outcomes & is more frequently being used privately to help weight loss, we tend to start it earlier in patients to reduce the risk of long term complications.

Sick day rules: GLP-1 analogues should be held if the patient is unwell/at risk of dehydration

Insulin is usually started when the HbA1c remains above 58 mmol/mol despite maximum tolerated oral agents. Starting insulin is no easy task for a patient or a medical professional. The patient or carer is required to inject the medication, self-monitor, have support in titrating the dose, learn how to manage hypoglycaemia & inform the DVLA if they drive.

If insulin is started, sulphonylureas like gliclazide are usually stopped due to the risk of profound hypoglycaemia or because the treatment is clearly failing – the pancreas is simply unable to release any more insulin.

There are multiple potential regimes:

Patients will be usually started on a basal-only regime with insulin types such as NPH insulin (Humulin I), Insulin Glargine (Lantus/Abasaglar), or Insulin Detemir (Levemir) typically with a dose that is about 10-20 units per day depending on insulin resistance. If they have high CBGs post-meals then the other two regimes may be considered or if their HbA1c is very elevated (above 75 mmol/mol) as per NICE.

In T1DM, most patients will be on a basal-bolus regime as this allows greater flexibility of meal times & doses can be adjusted for each meal.

We usually start around 0.3 units/kg/day to begin with and titrate this up based on a patient’s blood sugars. Usually, patients will need around 0.7-1 unit/kg/day but it is important to avoid hypoglycaemia as this will often scare patients into running their blood sugars high.

Sick day rules: Never stop insulin as illness often results in increased insulin requirement. If in hospital & not eating/drinking, the patient may need to switch to variable rate insulin infusion usually alongside their basal insulin. You should check your local guidelines.

Here is a list of rarely used drugs & an explanation of why that’s the case. If you meet a patient on these drugs, you should review whether they are appropriate.