A deep vein thrombosis (DVT) is a condition in which a blood clot (thrombosis) forms within a deep vein and can be provoked or unprovoked [1]. 2.5-5% of the population will have a DVT in their lifetime [2].

Virchow’s triad explains the relationship between venous stasis, hypercoagulability and endothelial vessel wall in increasing the risk of thrombosis [2].

DVTs most commonly affect the lower limbs, but can affect the upper limbs, with symptoms arising from the partial or complete obstruction of venous return. Signs and symptoms to assess for include:

A flow chart of the NICE guidelines is included below, which uses the Wells Criteria in conjunction with a d-dimer. A d-dimer is a great “rule out” test but a poor “rule in” test (i.e. great sensitivity/negative predictive value but poor specificity/positive predictive value). This is because many things can cause a raised d-dimer, not just a DVT, e.g. inflammation, infection or pregnancy.

Figure 1: Assessment and investigation of suspected DVT from NICE guidance 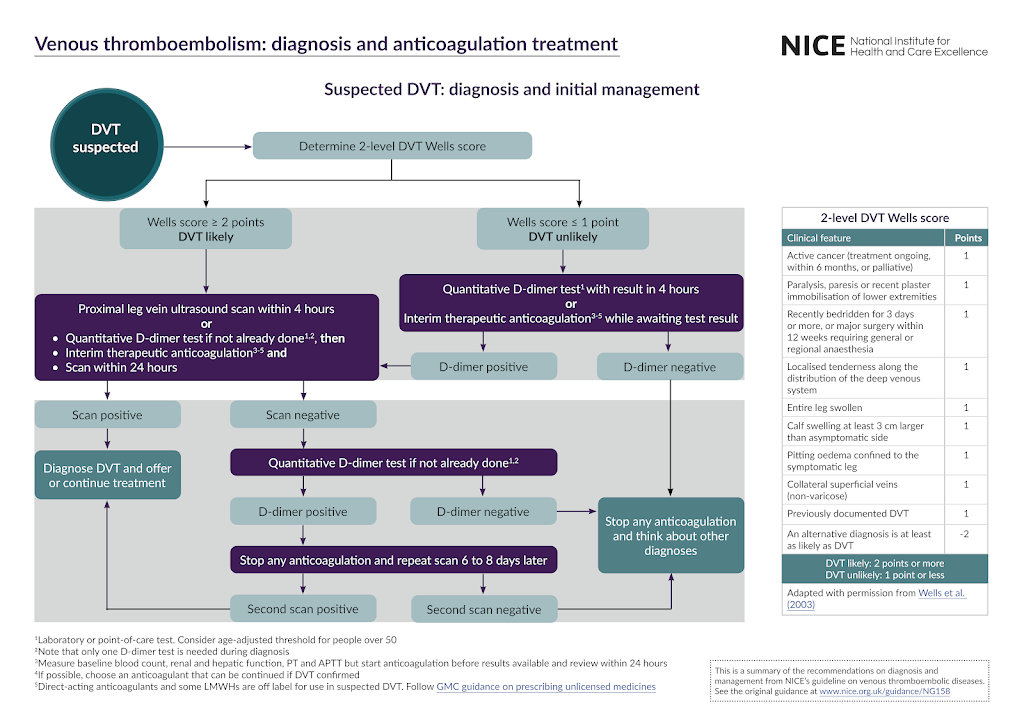 If negative, perform a d-dimer which if negative rules out a DVT. If positive, anticoagulation isn’t necessary but a repeat ultrasound scan in 6-8 days is recommended.

Anticoagulation used in the treatment of DVT from NICE guidance

None of: renal impairment, active cancer, antiphospholipid syndrome or haemodynamic instability
Offer apixaban or rivaroxaban If neither suitable, offer one of:

Renal impairment
Use the Cockcroft & Gault formula for estimated creatine clearance.
If CrCl 15 to 50 ml/min
If CrCl < 15 ml/min, offer one of:
Note cautions and requirements for dose adjustments and monitoring in SPCs. Follow local protocols, or specialist or MDT advice

Consider a DOAC If a DOAC is not suitable, consider one of:

Offer anticoagulation for 3 to 6 months Take into account the tumour site, drug interactions including cancer drugs, and bleeding risk