The advantages of AXRs are far less radiation to patients & that they’re logistically easy to organise out of hours. Unlike CTs they do not need to be discussed with the on-call radiologist but they aren’t reported as quickly therefore it is crucial you can interpret them. The most common indication for an AXR is suspected pneumoperitoneum or obstruction. 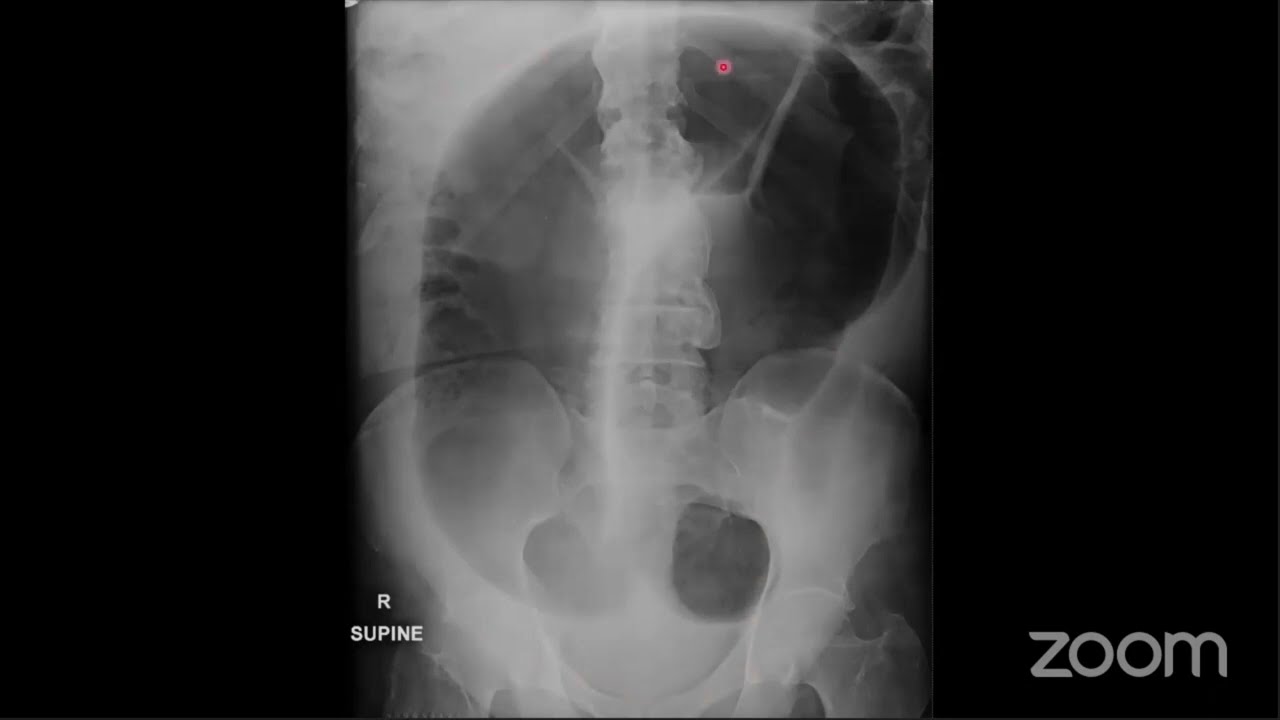 Firstly, a quick reminder of the colours of different materials on XR (image from Nottingham University)

Before requesting a scan do check if your patient is pregnant (LMP, recent unprotected sexual intercourse). Although it isn’t an absolute contraindication, it does need discussion with seniors and the radiologist to carefully balance the urgency of the scan and potential harm.

1) Identifiers & quality of the film

2) Air in the abdomen

Air rises to the top when there is pneumoperitoneum (e.g. as a consequence of stomach or bowel perforation). But as you can see from the images above, you cannot reliably look for air under the diaphragm in an AXR and thus a CXR is recommended.

Rigler’s sign below demonstrates what a pneumoperitoneum may look like on an AXR. The bowel wall is clearly delineated with black on either side because there is air outside of the bowel. Compare this to the above images.

Below you can see the radiographic appearances of the normal bowel (compare this to the images above noting that you cannot see black outside of the bowel wall below).

Review the general appearance of the small or large bowel, noting anything that looks unusual. If it looks dilated use the measuring tool to measure the diameter. The small bowel can measure up to 3cm, large bowel up to 5cm and the caecum up to 9cm.

It is located centrally with circular folds (valvulae conniventes) that transverse the bowel. There is minimal air from peristalsis. If dilated beyond 3cm, consider small bowel obstruction which is most commonly caused by adhesions, hernia or tumour.

It is peripherally located with incomplete semi-circular folds (haustra) that do not transverse the entire bowel. If dilated beyond 5cm (or 9cm in the caecum), consider large bowel obstruction which is most commonly caused by tumours, abscess, diverticular disease & volvulus.

A twisting of the bowel seen as a large pocket of air in a classic ‘coffee bean’ shape in sigmoid volvulus & ‘kidney’ shaped in caecal volvulus. The concern is it can become ischaemic due to the blood supply cutting off which is life-threatening.

Severe constipation can be demonstrated on AXR with faecal loading. They appear as hazy clouds, which, if seen in the rectum, demonstrates faecal impaction. This can cause overflow diarrhoea, subacute obstruction, toxic megacolon and perforate the bowel.

It can be easy to miss objects that have been ingested or inserted if you do not look out for them. Similarly, it is easy to miss drains and tubes.

An NGT confirmation could be done by measuring the pH of an aspirate or on an erect CXR. Unless told otherwise by your trust, as an FY1 you cannot confirm NG tube placement on CXR as getting this wrong could result in a patient’s death. It is NOT appropriate to use the whoosh test, litmus paper or use the appearance of NG aspirate.

It is important though for you to spot an incorrectly placed NG tube to ensure it is quickly removed. Ensure the tip of the NGT is clearly visible on the radiograph. If the tube does not follow the midline bisecting the carina it may be in a bronchus & ideally, it should extend 10cm beyond the gastroesophageal junction.

Images of a correctly placed NGT are not included purposefully to stress the point that you require separate training. In some places, only a registrar or the radiology team can confirm NGT placement.

It is good practice to review the spinous processes looking for scoliosis, fractures or other pathologies. Occasionally you may see kidney or gall bladder stones however this is quite rare and usually more advanced imaging is required e.g. CT KUB (renal) or ultrasound for dilation of the common bile duct (gall bladder).